WASHINGTON—Mortgage giants Fannie Mae and Freddie Mac could save $1.7 billion more than current loss-mitigation approaches by reducing loan balances for some troubled homeowners, according to a preliminary analysis by the firms’ federal regulator.

The findings presented Tuesday hinted at a potential shift in the position of the Federal Housing Finance Agency, which until now has kept a hard line against forgiving debts of homeowners by maintaining that other types of loan modification are less costly to the taxpayer-backed mortgage giants. That math changed after the Treasury Department offered to pick up part of the tab for any debt-forgiveness program. 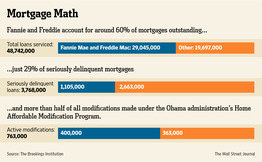 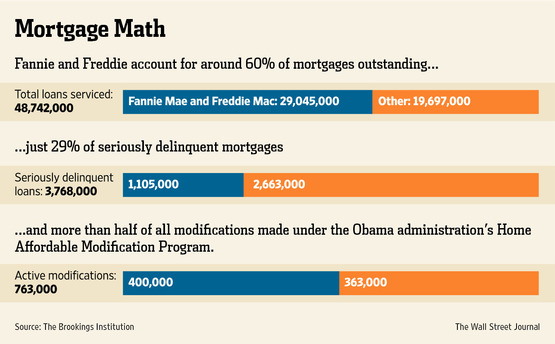 Still, the agency’s acting director, Edward DeMarco, reiterated his skepticism of so-called principal write-downs. He said they could end up costing the firms more money than they save if they encourage even a modest number of homeowners currently making their payments to default in hopes of gaining more favorable treatment.

And unlike banks that sometimes cut debts on mortgages they own, Fannie and Freddie would be relying on hundreds of mortgage companies that manage payments on their behalf, creating greater operational headaches, he said.

Mr. DeMarco has been at the center of a heated debate over whether the taxpayer-supported firms should do more to boost housing markets. He remains bound by competing mandates: to limit the firms’ losses and to promote efforts to modify mortgages for troubled borrowers.

Mr. DeMarco said Tuesday he hadn’t yet reached a final decision and that even if he gave principal write-downs the green light, there were fewer than 700,000 borrowers that could potentially qualify.

“This is not about some huge difference-making program that will rescue the housing market,” Mr. DeMarco said in a speech at the Brookings Institution, a Washington, D.C., think tank. “It is a debate about which tools, at the margin, better balance” the agency’s competing mandates.

At the heart of the debate are two questions: Will more aggressive—and expensive—mortgage modifications help accelerate a housing recovery that saves the firms more money over time, generating what economists call “positive feedback”? And will providing debt forgiveness to some borrowers prompt others to default in hopes of receiving similar help, generating “negative feedback” that cuts in the other direction?

“The various participants in this debate tend to take one side or the other, but both are plausible,” said Mr. DeMarco, who has received heavy criticism from many Democratic lawmakers and state officials for refusing to allow debt forgiveness.

Mr. DeMarco has repeatedly raised concerns about forgiving debt. Nearly three in four heavily underwater mortgages backed by Fannie and Freddie are making timely payments. Offering to help those who have stopped paying their loans, he said, “creates a sense across the country among all these borrowers who are paying their mortgage [of], ‘What am I doing this for?’ ”

Until now, he has maintained that so-called principal forbearance, where Fannie and Freddie don’t require payments on a portion of the loan balance, is less expensive than forgiving debt. But in January, Treasury extended for the first time taxpayer subsidies from the $700 billion Troubled Asset Relief Program to Fannie and Freddie if they would forgive principal.

The FHFA’s analysis showed that offering forbearance to deeply underwater borrowers would save $8.2 billion compared with doing nothing, while principal reduction, after including the Treasury subsidies, would save $9.9 billion.

While write-downs would save around an additional $1.7 billion for the firms, it wouldn’t necessarily reduce costs for taxpayers, who would be on the hook for $3.8 billion in Treasury subsidies, according to the FHFA analysis.

The analysis also said that the savings from principal write-downs would be wiped out if between 1% and 5% of underwater borrowers who are current on their payments stopped paying.

Proponents of write-downs have said that concerns about such “strategic” defaults are overstated. “The vast majority of homeowners don’t operate that way,” said Shaun Donovan, the secretary of the U.S. Department of Housing and Urban Development, in an interview last week.

“While they are a “reasonable concern in certain circumstances, there are ways to be careful and to design around it in order to ensure that it doesn’t become a real issue,” he said.